in the council chamber

Yesterday I spent several hours at City Hall in the Council Chamber.  My plan was to be there during CADA's presentation in the morning, and then work a1-9pm shift at my part-time job. 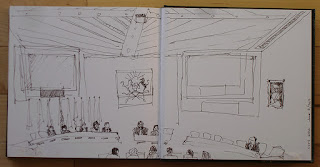 The CADA meeting was supposed to take place at 9am.  What happened was this:

About 300 people showed up in support of CADA, more people than the council chamber can hold.  Therefore the Speaker declared that there would be a re-ordering of the schedule: a few other small items first would be taken care of first, thus clearing some of the seats so that more of the CADA supporters could have seats later.

Those "other small items" took close to 3 hours, and I stayed through almost all of it, observing part of the process of civic decision-making.  In the end I'm glad they switched things around, because I have never sat in a Council Chamber during bylaw debates, crime prevention strategy effectiveness reports, budget amendments - and I found the whole process quite fascinating.

While listening to the discussions, I made some drawings of the Aldermen, the City Manager and the Speaker. 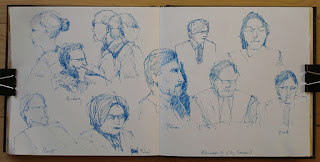 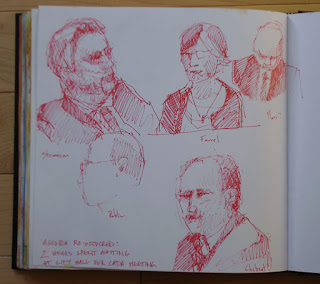 In between these items I phoned my place of work to ask if I could come in later than scheduled.  Lucky me, it was a slow day and that was no problem.

There was a 1/2 hour lunch break, and then the CADA came up.  People were doing lots of tweeting during the meeting, but I don't have a cell phone or a twitter account, so I just made those drawings and listened.

First, Terry Rock made, as it happened, his final speech and presentation to the Council.  He talked about why the arts are vitally important, why they need to be factored into City plans for development.

Other audience members also presented their ideas about why the arts are important to them personally and to the fabric of our culture.  It was so good to get a renewed sense of why what I am doing is important.  I sometimes question the validity of making paintings when there are so many other, seemingly more useful, things I could be doing, and yesterday I got a little confidence boost.

I feel I am not very articulate in explaining some things, but I can say that at the end of the meeting there was a sense of accomplishment.  This City understands the importance of, and is happy to support, the arts into the future.  If you want more details of how and why and where and what, please visit CADA's website, lots of articulate information there.

I was so glad I was able to attend this meeting!  I have not really followed or been involved with CADA in the past, and in some way I'm not even sure why I decided to go to this meeting, beyond a vague feeling that I ought to.

A great day it was!

at 11:07 am
Email ThisBlogThis!Share to TwitterShare to FacebookShare to Pinterest