The very first studio I rented in this city was managed by the Untitled Art Society, an organization which is committed to providing affordable communal studio space for emerging artists.  Over the years, the UAS has grown and evolved into a registered non-profit society.  As well as the original studios located on the 4th floor of an old industrial building downtown, they now operate the "Satellite Gallery", a street-level exhibition space near the studio building.

The UAS recently did a call out to members who have shown at the Satellite Gallery, to create artwork using albums - ah, vinyl! - for a fundraising event.  I almost always create work for UAS's fundraisers because I think what they are doing is very important in the art community.

For this experiment, I used a record of Burl Ives singing "The Little White Duck and Other Children's Favourites".  I found the whole album on youtube and listened to it while working, which was an interesting cultural experience, ha.  Times have sure changed.

To make these pieces, first I carefully took apart the album cover to make two square pieces of cardboard.  I coated each piece with clear acrylic medium to seal it, then I stitched in some textured things.  I decided to cradle the stitched cardboard pieces before layering on the colour.  The final layer was clear medium with a tiny bit of gold paint, which created a really nice kind of old patina effect, but it doesn't show up in these photos unfortunately.

The front of the album cover shows Burl Ives with his guitar and a group of children.  Not so visually interesting for me, so I used the inside.  I gesso'd it before stitching. 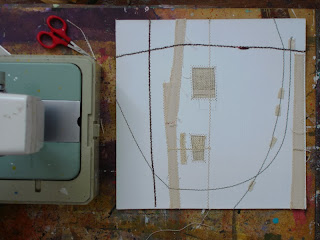 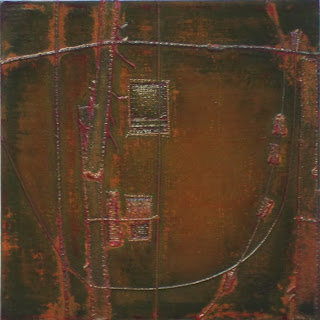 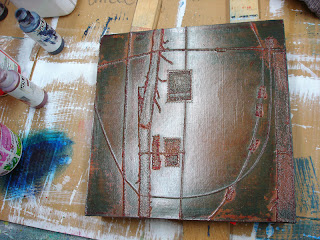 I wish I had taken a photo of the inside of this piece, with the cradling wood glued to the album cover image and the stitching running over Burl and the children.  The painted part looks precious with its hint of old gold - but on the inside there is a total disregard for the image and all it represents... or maybe it's more of a "stitching the new onto the old foundation" kind of thing.

The back of the album had these interesting little images for advertising more albums, so I kept that in the work. 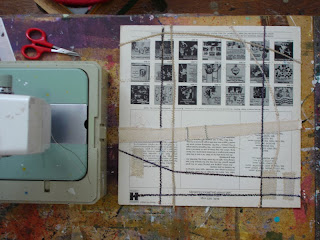 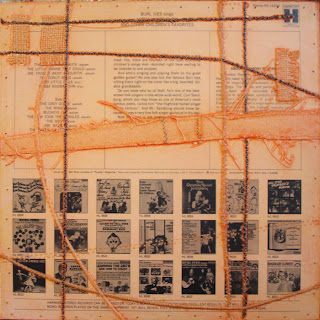 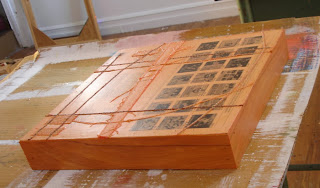 One of the great benefits of creating work for fundraisers is that I try new things, change my process a bit, and sometimes I get really inspired by the work!

I just loved working with the cardboard album cover pieces.  They were easy to stitch through and the texture of the paper contrasted nicely with the texture of the bits of canvas I stitched onto them - a lovely combination of surfaces to paint on.  I think I will be doing some more paper/stitching experiments in the near future!

at 10:47 am
Email ThisBlogThis!Share to TwitterShare to FacebookShare to Pinterest
Labels: donated work

I have to date myself. When I was a kid, my mom had purchased the Burl Ives sing-along American folk tunes songbook a thick, hardcovered book of piano music with lyrics. I sat for hours as a child learning those songs. There are some downright bloody-hearted folk songs--hangings, drownings, murders, suicides--I sang them all with great gusto and pounded them out on the piano. I'll have to take a look at the UAS fundraiser! http://www.amazon.com/Burl-Ives-Sing-Along-Song-Book/dp/B0007HXVFM