My work has been accepted into a TREX exhibition!  I feel very honoured to have my paintings shown along with the work of several other artists in "Eye And The City", which will travel throughout southwestern Alberta for two years, beginning in mid-2014.

Shane Golby, a visual artist himself and the travelling exhibitions manager/curator, made a studio visit two weeks ago and we had a great conversation about life, art, the urban phenomenon, the universe and everything.  As a result of our conversation, I have been thinking more deeply about my work and about connections.

A comment about the history of stitching on one of my recent blog posts underlined an idea about where my work comes from and how it connects to my life and my family's history.  I've spent the last two weeks writing and thinking a lot, and tonight have finished the final draft of a new artist statement.  Read on... 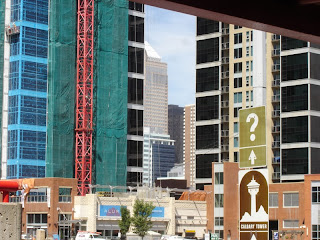 WHY DO WE BUILD WHAT WE BUILD?


My childhood was spent on a farm in southwestern Ontario, but I have lived almost all my adult life in the downtown core of one city or another across Canada. Having roots in a rural environment has shaped the way I view urban life.

It can be exciting and sometimes overwhelming to be in an environment with so much sensory stimulation, especially if you are not used to that type of environment. My first impression of city life was that there is a lot of information coming in very fast! Lots of lights at night. Sirens near and far. So many layers of buildings. So many people. Everything moving all the time. That first impression has not changed much, even after many years of city living. The energy of urban places still feels exciting and irresistible to me, and this feeling continues to inspire my work.

A city is a place of concentrated human energy, full of human-made things. Even the green spaces in an urban environment are made by people, or at least they are managed, cultivated, and made accessible for almost everyone in a way that the countryside is not. The most deliberately designed urban green spaces may feature highly manicured, symmetrical rows of trees and evenly spaced flower beds. Urban grey spaces, though equally deliberately designed, do not adhere to the perfection of their architectural elevation drawings: you can find meandering footprints on straight sidewalks, random patterns of discarded chewing gum on neat squares of concrete, and other signs of resistance to the order of human design.

This type of environment, where almost everything is human-made but not entirely under human control, is quite fascinating. Why do we build cities? Why do we build them the way we do?

During my childhood, my father built barns and designed machinery, and my mother sewed for people. She worked at the kitchen table in the evenings, and used wonderful fabrics - silk and satin and organza, intricate laces and beads, shiny embroidery thread - to make wedding dresses. Those beautiful dresses were a big contrast to the world of livestock and crops that is a farm.

When I grew up I moved far away from my family, too. I became an artist. Sewing is part of my work, but instead of using beautiful fabrics to make wedding dresses in the midst of farm life, I use common materials - canvas, burlap, a torn sweater, bits and pieces found on the street – to make beautifully designed paintings in the midst of the an urban environment.

Although in many ways my city life is very different from my parents' farm lives, which in turn were different from their parents' lives in Holland and Brasil, you could say that our histories are stitched together.

I didn't think about it too much at first, but gradually I saw that cities are mostly built by men, and sewing is mostly done by women – and here I am, in effect, building cities with my sewing machine.

Here is the work which will go into the exhibition:

at 10:25 pm
Email ThisBlogThis!Share to TwitterShare to FacebookShare to Pinterest
Labels: TREX

I love all of this. And I love the works that will be traveling. This is interesting: your reference to the random signs of human resistance is intriguing and has given me an entirely new lens through viewing lens. I have ever been fascinated by the fact that one's entire perspective can change by "just turning your head a litte." I can feel the energy.

That bit about "green" vs "grey" areas of the city took a lot of re-writes to get anywhere near what I wanted to say without going into a load of tedious detail- glad to have triggered your thoughts/perceptions.

This raises very interesting questions: "This type of environment, where almost everything is human-made but not entirely under human control, is quite fascinating. Why do we build cities? Why do we build them the way we do?"