This painting began several months ago. I wanted to take the sewing as far as I could - how large a canvas, how many seams, before stretching the thing becomes impossible?

This one was quite difficult to stretch. So much sewing, the canvas inevitably went a little crooked & wobbly with all the patching of small bits - I think there are at least 50 separate pieces of canvas sewn together here! It is not strethed very tightly; this makes it difficult to paint on without touching the supports behind the canvas, which leaves a mark in the brush-stroke.

I am painting very carefully! 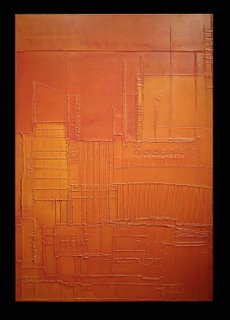 Some of my paintings have names.
Most of those names - titles is the proper term I suppose - are simple descriptions.
Not thought about, just arrived at: a way to distinguish one from another in conversation.

Many of them wind up with numbers instead of names.
Especially those done in series, like the work I did in June for 30dayartist.


This painting had been turned to the wall & ignored for a couple of months, because I didn't know where to go with it. It is the 9th sewn canvas I had made, and I was getting a bit stuck on the sewing lines, doing a paint-in-the-shapes kind of thing with them up until this point. Wanted to get outside those lines, but was afraid of mucking things up.

Ha! Afraid of "ruining" this canvas - badly stretched, difficult to paint on, in general a pain in the neck kind of experiment. Funny.


Then I did 30dayartist, and now I am finally beginning to use what I learned from that experience.
Making all those little paintings in June had been a worthwhile excercise in that I tried various approaches to painting on canvasses that already had a composition sewn into them.
Because those canvasses were small, I was able to experiment a little more: if one is ruined, it's not so big a loss! 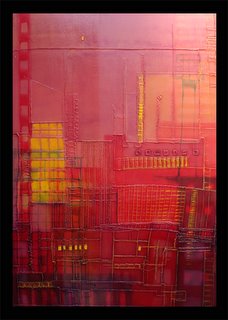 
I hauled it out of hiding & stopped worrying about what might happen & just began painting.

It's not finished yet - maybe not by a long shot! - but I am liking the progression so far. 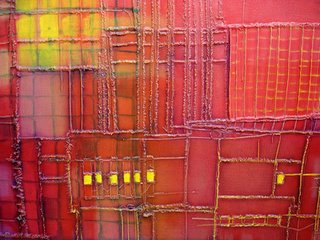 detail - just look at all those little bits of canvas pieced together!

Am I crazy or what?
at 9:16 pm 2 comments:
Email ThisBlogThis!Share to TwitterShare to FacebookShare to Pinterest
Newer Posts Older Posts Home
Subscribe to: Posts (Atom)