and now for something a little different

at 12:32 am 4 comments:
Email ThisBlogThis!Share to TwitterShare to FacebookShare to Pinterest
Labels: plein air

An unexpected turn of events - part 2

Two weeks ago I had the pleasure of facilitating a week-long Campus Calgary Open Minds session with grade 4-5 students at the Arts Commons.

Mission: to create "3D, site-specific installation artwork which will interact with the public."

The theme of the class was "Inclusion".  We discussed what "inclusion" means, and ways to show inclusion in stance, facial expression and interaction among people.  We had a tour of the building, and the students made some preliminary exploration drawings - I encouraged them to come up with at least two variations on their ideas - and then we dove into working with our hands.

We began with wood armatures... 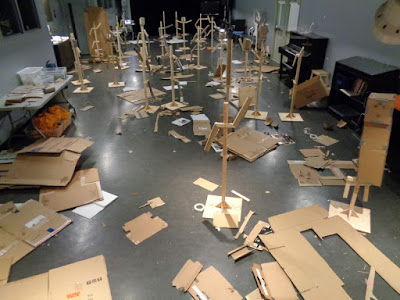 ...built up the forms with cardboard... 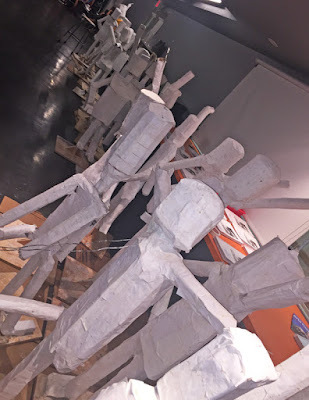 ...and finished with paint, beads,
sequins, feathers, yarn and string.

Such simple words to describe a series of complex tasks!  There were many elements to consider:

Anatomy - wood bones, cardboard muscle & tissue, papier-mache skin.
Simple machines - positioning arms and legs to create a dynamic figure.
Use of tools - drills, tape measures and staple guns (the papier-mache was also new to a few of the students).
Spatial thinking - scaling up 2D drawings onto the 3D armatures.
Colour - conveying emotions and ideas through colour.

This project was a first for me and I was not sure whether it would be possible to complete in a week, but in the end it all came together wonderfully.  Once again I found I could trust the students to take an idea and run with it. 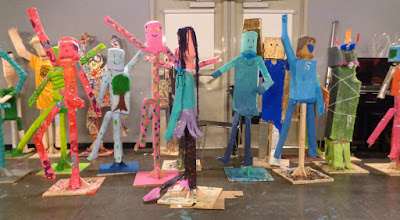 Their teacher's attitude also had a huge impact on the success of the project - she was happy to take it on even if it didn't work out, saying it would be a great experience either way.  Now that is an ideal attitude for collaboration! 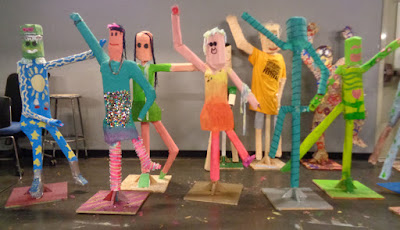 Because, you know, these art sessions really are a collaborative effort between the artist and the classroom teacher, to ensure the students have a fun and in-depth learning experience. 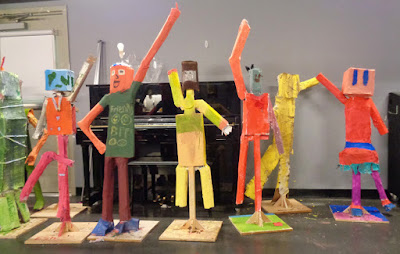 Also invaluable was the help of various parents throughout the week, as well as the hands-on support of Arts Commons program co-ordinator.

On the last day of the week-long session, we transported the finished work to various locations around the Arts Commons building. 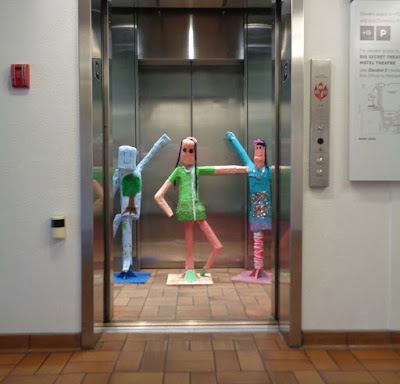 The environment in which the figures were placed had an impact on how they were perceived. 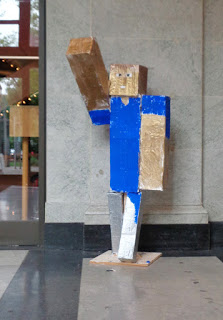 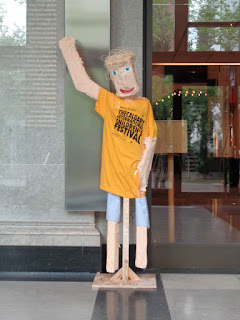 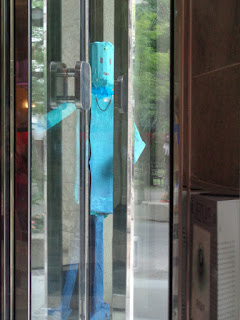 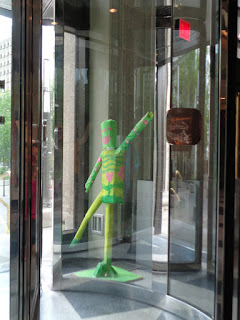 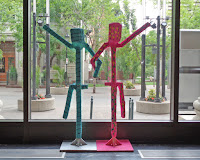 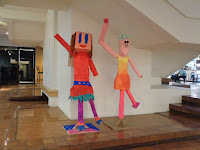 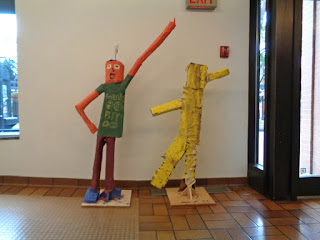 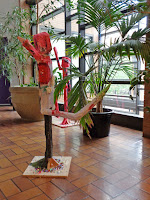 Then they were put into the art supplies room over the weekend, giving a cheerfully cramped aspect to the small room. 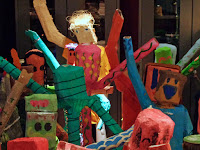 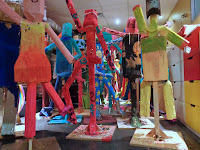 The following week they had their grand finale: spending a few days on stage in the lobby of the Jack Singer Concert Hall! 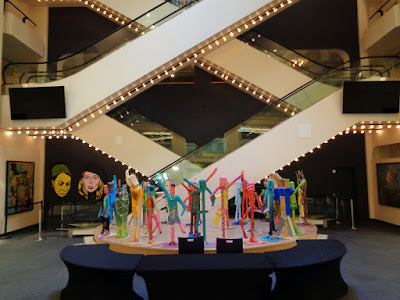 There were dance performances going on all week, so lots of people could see and respond to the installation. 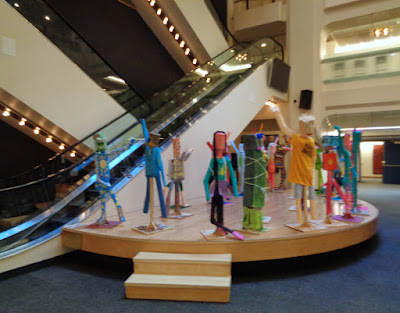 Wrapping up their adventures at the Arts Commons, they were bundled into a truck and taken away, back to the school. 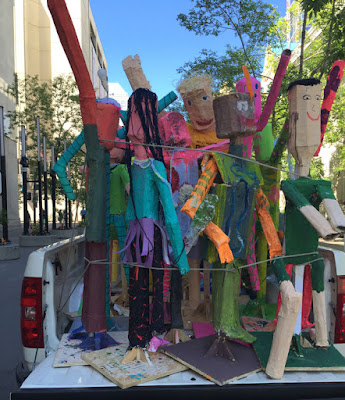 During the exodus, passers-by stopped to take photos with the colourful figures, adding a final layer of public interaction. 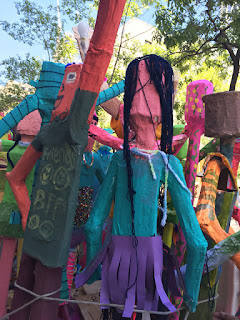 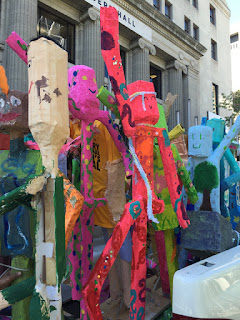 May these papier-mache figures - and their makers - continue to have interesting lives at their school and into the future beyond! 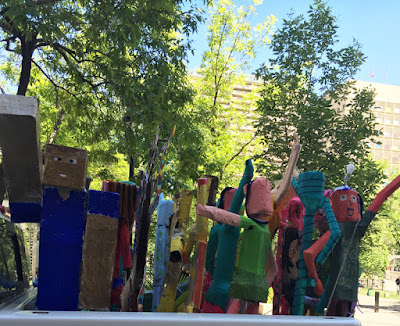 at 2:10 pm 3 comments:
Email ThisBlogThis!Share to TwitterShare to FacebookShare to Pinterest
Labels: teaching

An unexpected turn of events

Last week, in the middle of my month of daily paintings, I got a call to develop and teach an intensive week-long art project for grade 4-5 students - with only 6 days to prepare!  Such short notice is not usual, but I managed to come up with a fairly large-scale project that turned out quite good.

Meanwhile, my daily paintings ground to a halt as the intensity of the class took up almost all my energy. 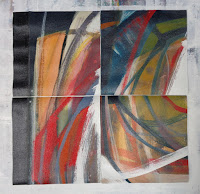 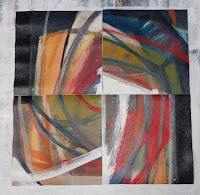 These images are of prep work I did a couple of weeks ago.  I cut up a number of old paintings into pieces which I gesso'd in order to use them as grounds for future colour studies.  I did not gesso over all the pieces though; I kept some and played with various combinations.

Today was a wrap for the class, so next week I will be able to focus on my own work again.  Perhaps I'll takes some of these cut-up compositions and translate them into further studies.

Before getting into the studio, though, I'm going to tend to my houseplants, almost all of which sorely need repotting!  That will make a good bridge between the two intense energies: the outward energy of teaching and the inward energy of the studio.

Somewhere in there I'll probably make a blog post about the recent class, too.  It really was a lot of fun.