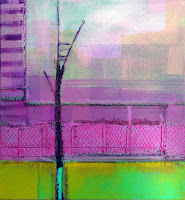 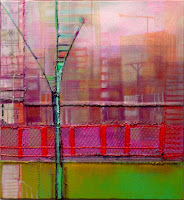 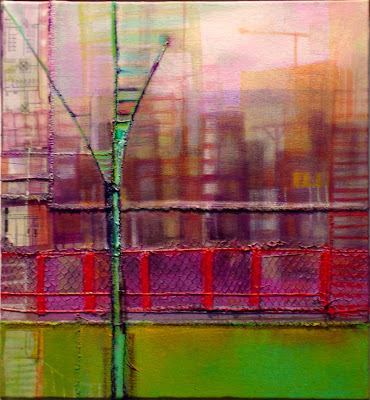 Finally the acrylic seems to be working for me...
at 4:19 am No comments:
Email ThisBlogThis!Share to TwitterShare to FacebookShare to Pinterest

First I learned to paint with acrylic, and used nothing but for ages.
Then a few years ago I decided to learn to use oils, and have used nothing but since.
Now I have decided to try acrylics again, partly because they are less toxic than the alkyd mediums which I love to use... and partly because acrylic dries so much faster than oil!
This could be an especially nice benefit for me, since I love to layer on the glazes, and 20 or 30 layers of oil glazes makes the painting a long time in the making!

Well these are not finished, but already I am feeling pretty ambiguous about the results: 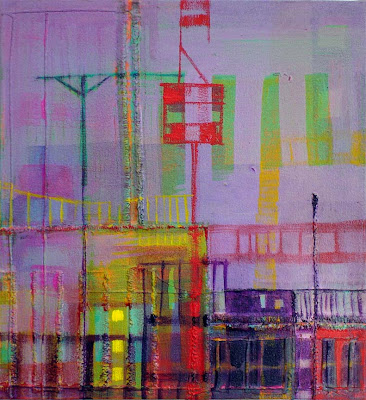 This one is a little more subtle, and may work out yet: 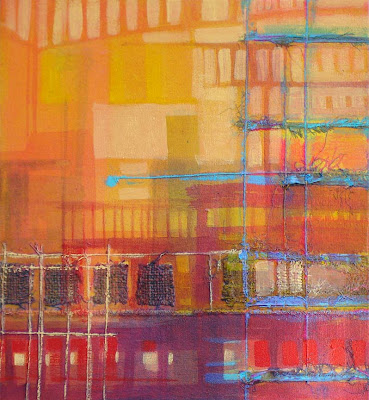 That purple tree has got to go, but the building shapes in the background are showing some potential: 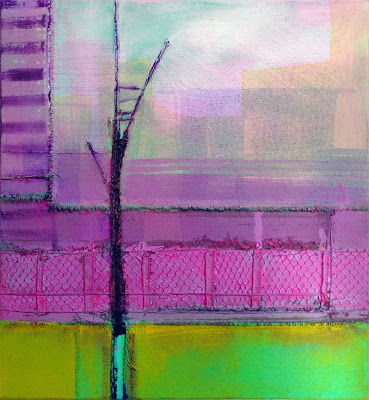 I am forming the conclusion that acrylic just will not give me what I want! However, this is just the first bit of experimentation and perhaps I have a lot to learn and re-discover...
at 10:08 pm 1 comment:
Email ThisBlogThis!Share to TwitterShare to FacebookShare to Pinterest

I have a friend who is a really great photographer, and many of her photos are undisputed works of art, in my opinion at least!

But (like all us artists) every photo she takes is not a success. A few nights ago we took some of her less-than-successful experiments and cut them up, and then glued them to pieces of card-stock paper to make our own postcards.

Her idea is to use a computer program to digitally "cut and paste" some photos into collages for postcards.... my idea is the hands-on approach with a ruler & carpet knife, glue stick & heavy paper!
She has a lovely open mind and so agreed to try the "hands-on" method with me. (not so sure I would be interested in trying the "mousing" method - oh, my dismally closed mind!)

These are a couple that I came up with: 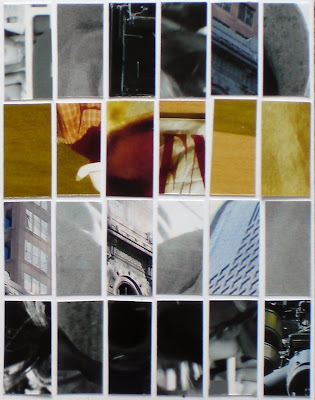 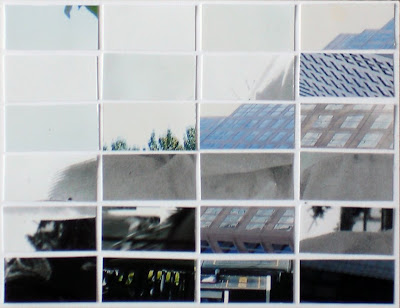 Next I would like to take them to a print shop and get copies made on card stock paper, have them cut - et voilâ: handmade, original postcards!
at 7:59 pm 2 comments:
Email ThisBlogThis!Share to TwitterShare to FacebookShare to Pinterest

You know how the city just sort of grows & grows...?
Calgary has no natural boundaries, no mountains or ocean's edge to stop the sprawl, and I have come to see it as very amoeba-like, enveloping whatever lies in the path of its residential psuedopods.

And I got to thinking about the relative speed of various types of changes.

Usually, the word "velocity" is associated with fast speeds: the velocity of a moving vehicle hurtling down the hiway, for example. 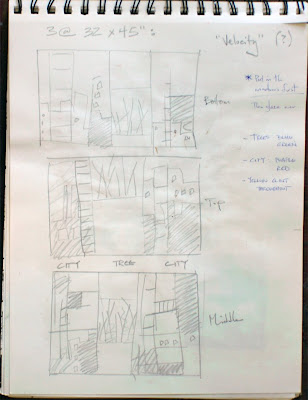 City meets trees - not clear which is being overtaken by the other...


Here are the canvasses just finished being assembled, pinned to the wall sideways for lack of space: That's a fourth canvas on the table, just begun.


This is my sewing assembly setup, after the floor has been swept! 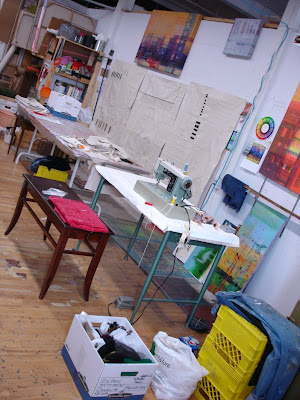 And here is the fourth canvas, now finished: 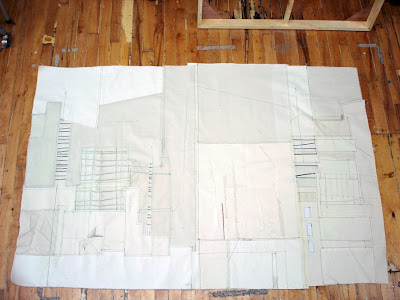 Just visible is the stretcher it will go on, measuring 37 x 58".


This is the cumulative effect of three and a half days' sewing at a slow but steady velocity - whew!

Next I will build stretchers for the first three canvasses - they will measure 32 x 42" each. Then I will stretch them, seal the seams, apply several coats of gesso, and finally begin painting.

Is it really worth all this effort?
Yes.
at 8:20 pm No comments:
Email ThisBlogThis!Share to TwitterShare to FacebookShare to Pinterest 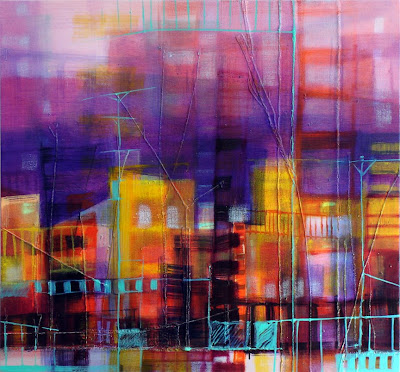 oil on stitched canvas
26"h x 28"w
at 8:18 pm No comments:
Email ThisBlogThis!Share to TwitterShare to FacebookShare to Pinterest

Whatever Leads to Joy

Bought a bag of oranges which came in a mesh bag - was about to throw it out, then thought "hey, wait a minute... this looks a bit like that chain-link fence they put around playgrounds....!" And thus an idea was born. 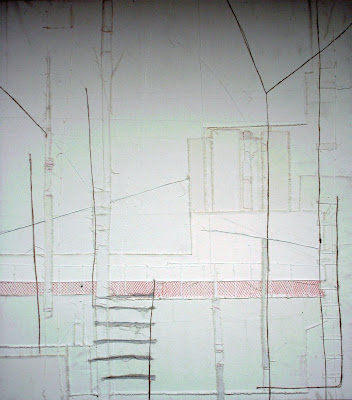 See that little dark spot on the orange mesh? That's blood. Pricked my finger while sewing the thing.
Yup, there's proof: I bleed for my art. 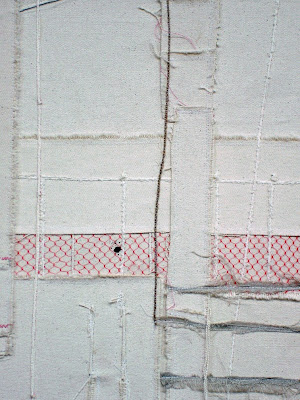 btw, "whatever leads to joy" is a line from a poem I heard on the radio a few days ago... not sure title of poem or author, but the line stuck in my head & I hope I'm not breaking any copyright laws by using it for a painting!
at 11:14 am 1 comment:
Email ThisBlogThis!Share to TwitterShare to FacebookShare to Pinterest

A Day in the City

My little chromatic grey paintings which used to be coloured until I went too far and screwed them up...

So I said to hell with it & painted them over, avoiding the colour issue altogether by making them grey.
And then realizing that greys are colours, too - very subtle colours!
at 11:10 am No comments:
Email ThisBlogThis!Share to TwitterShare to FacebookShare to Pinterest
Newer Posts Older Posts Home
Subscribe to: Posts (Atom)