I've just taken apart some older paintings, removing the canvas from the stretchers.

Over the course of the past few years in my studio I've been very focussed on searching for a new language; or more accurately, exploring ways of expanding my existing language.  Inevitably, some of my forays were not particularly sophisticated, and it is those unsophisticated explorations that I've disassembled.

So now I have got a lot of "new" canvas stretchers, and also a lot of pieces of painted canvas which may find their way into new work. 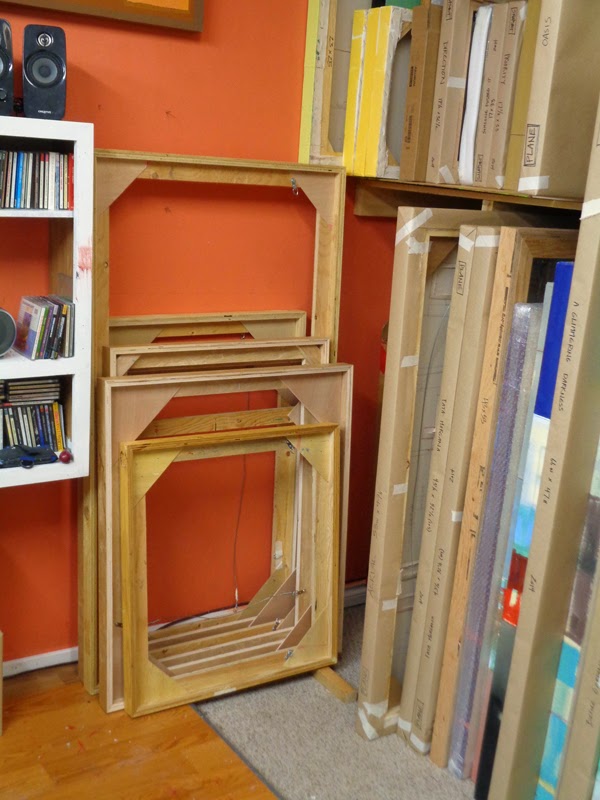 The greatest benefit, though, is that I have got more space in the studio: mental space as well as physical.  No longer peripherally bogged down by work that is less than I am aiming for, I feel a renewed sense of vigour. 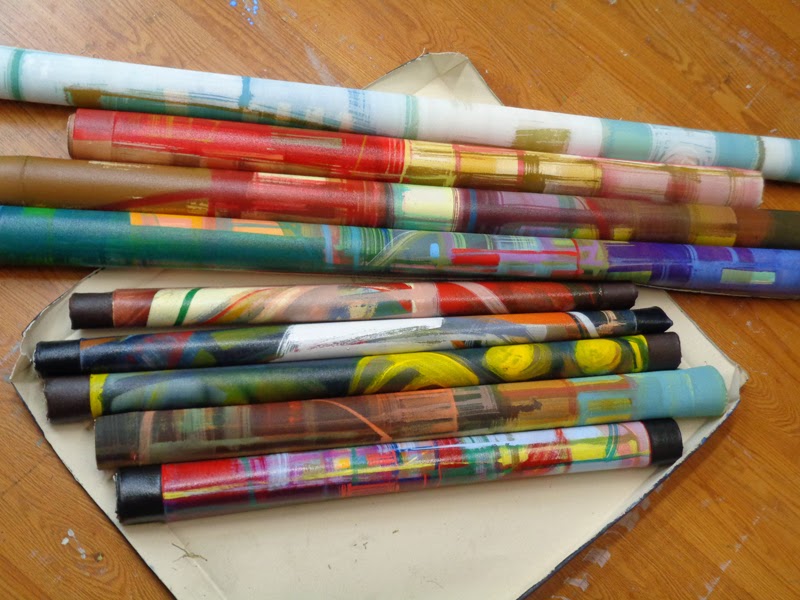 Happy days!
at 10:48 am No comments:
Email ThisBlogThis!Share to TwitterShare to FacebookShare to Pinterest
Labels: abstract

A few weeks ago I was in Arizona, and in the desert I found circles!  Old rusted-out buckets, parts of wagon wheels, and other vestiges of a bygone era. 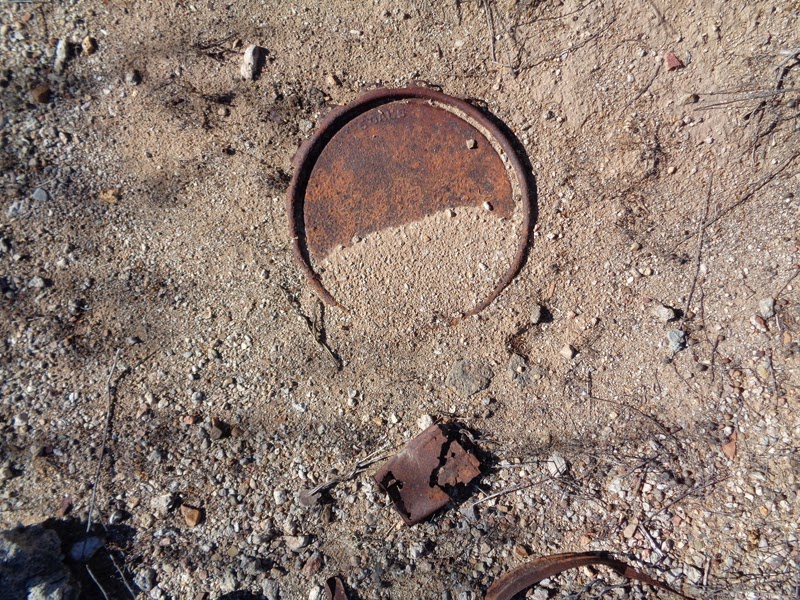 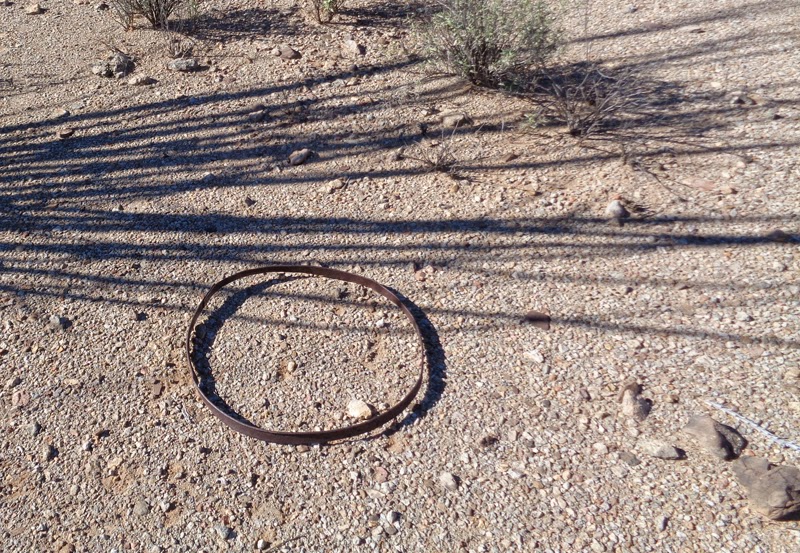 Apparently a circle is the most perfect geometric shape, since every point along its edge is an equal distance from its centre.  A circle also has the greatest area of any two-dimensional shape in proportion to its perimeter.  Here's some more interesting information about circles.

My "Ellipse" works are intuitively an attempt to find balance and calm.  Lately the world around me seems very convoluted and overwhelming, and perhaps my job as an artist is to help maintain balance, to remind myself (and possibly others) of how to be calm and centred, to take time, to be thoughtful in the great mad rush of the world.

I'm not always calm and thoughtful.  However, I believe that when we are engaged in making art we can transcend our human frailties; and I believe that the art of making art lies in a willingness to be, simply, a conduit for something that already exists, something bigger than ourselves.  Because nothing comes from nothing, right?

For myself, I wish to be a conduit for the calm and peaceful rationality that I know is already out there, even though it often seems obscured or distant.

at 7:00 am 2 comments:
Email ThisBlogThis!Share to TwitterShare to FacebookShare to Pinterest
Labels: ellipses, work in progress

it's in the details 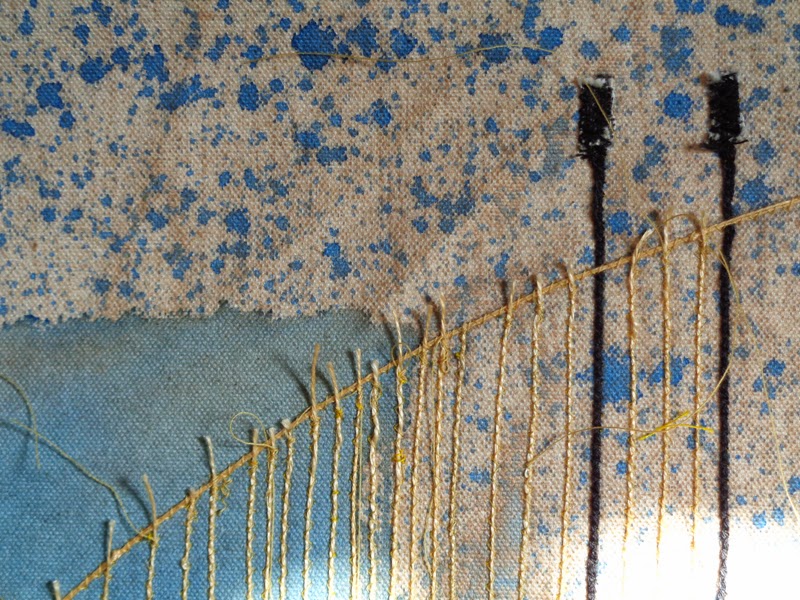 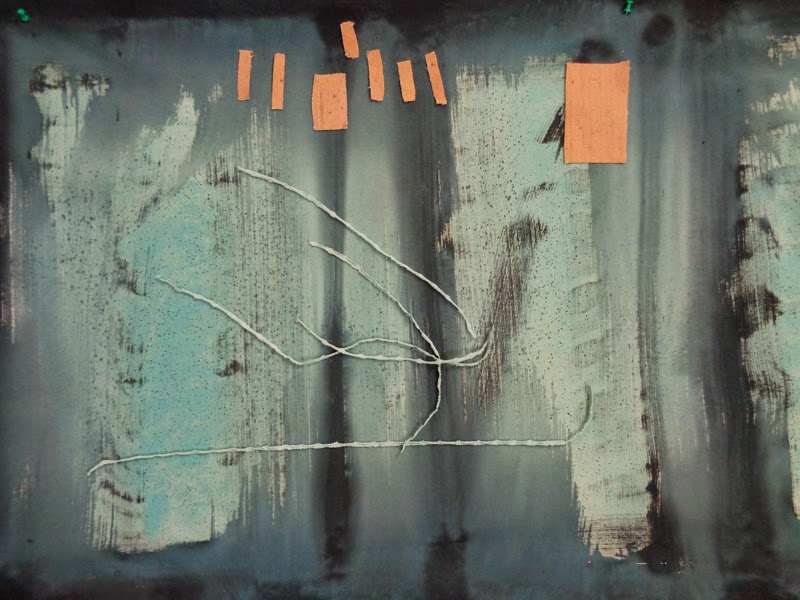 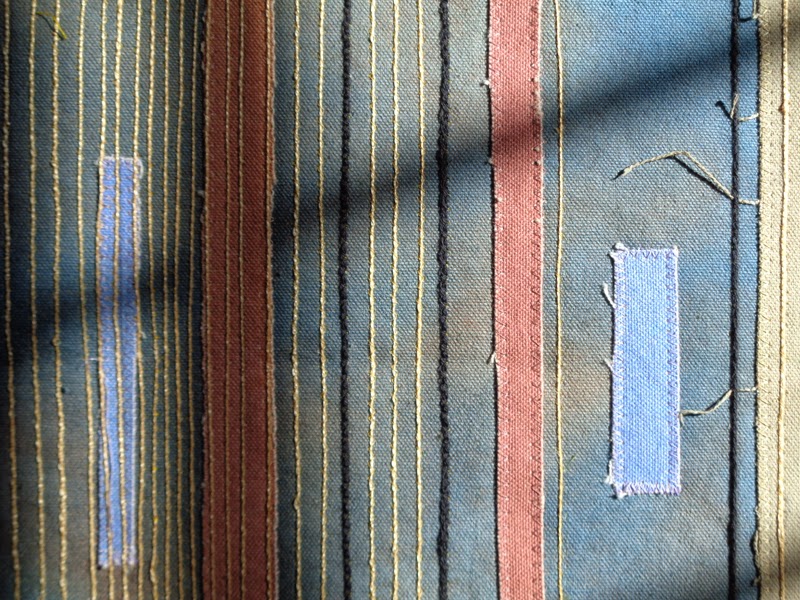 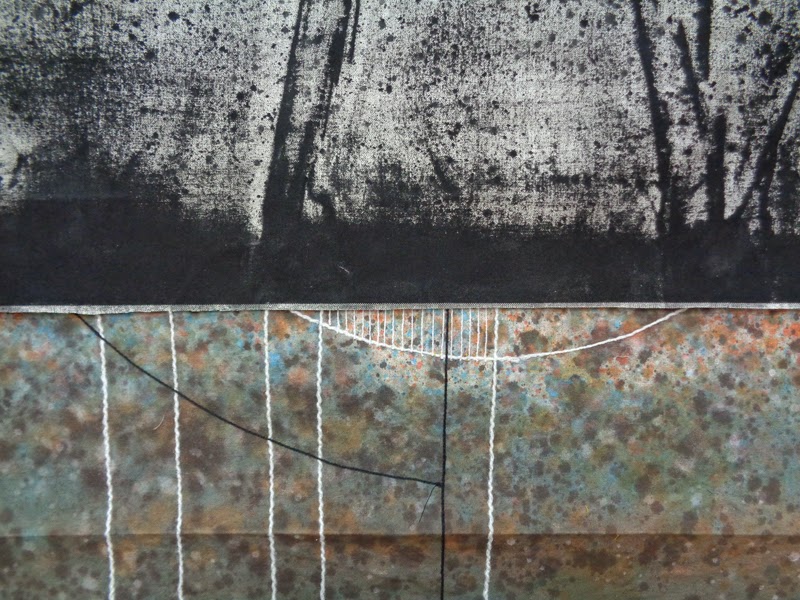 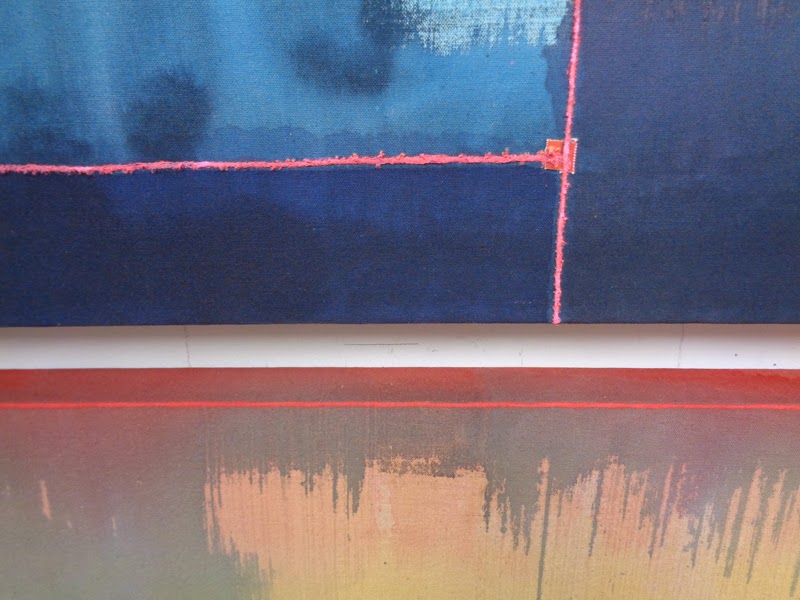 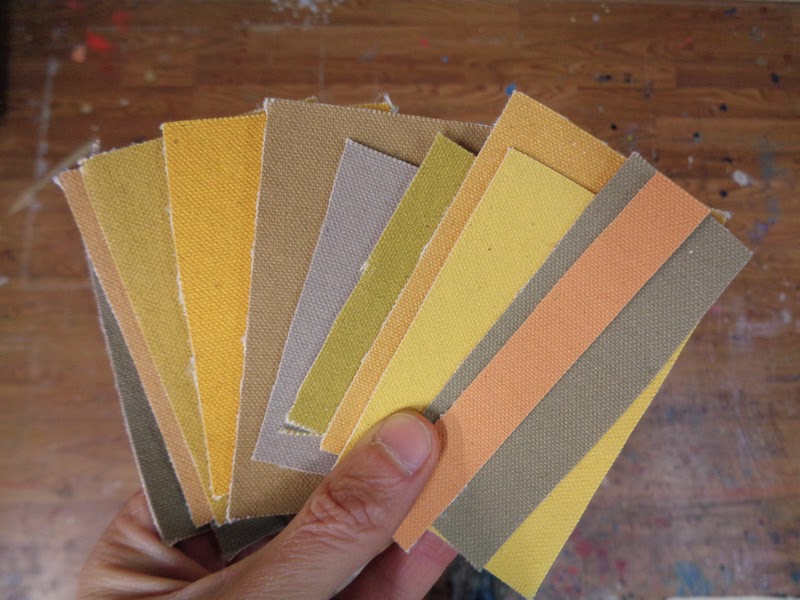 at 10:47 pm 3 comments:
Email ThisBlogThis!Share to TwitterShare to FacebookShare to Pinterest
Labels: ellipses, work in progress

When I got back from the Artscape residency I was very keen to get back into my studio!  Whee!

First job I tackled was to finish the cards which I began at the residency.  It was my intention to send them out for xmas...

... however, as I finished each one and pinned it to the studio wall and continued to work, those cards got into my peripheral vision!  And from there into my my subconscious creative brain!  And they clamoured for more attention!

So I could not send them out just yet.  I had to leave them up on the wall (and send out *gasp!* store-bought cards) while I began a new series of large canvas works inspired by those paper explorations. 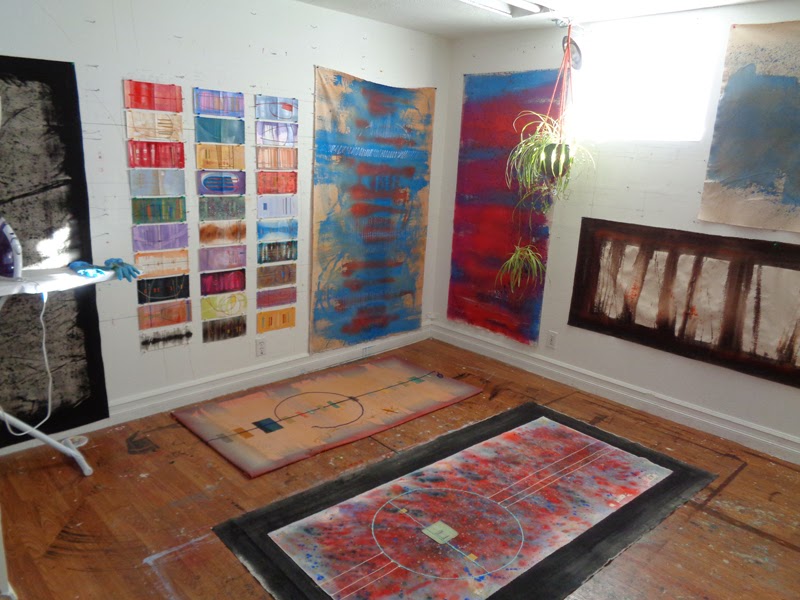 One of the repeating patterns in the cards was circles.  Easy to free-stitch on a small scale, exponentially more difficult when scaled larger!

I found I had to plan ahead, do layouts, try out variations of shape and line with my materials and then trace out the selected patterns prior to stitching. 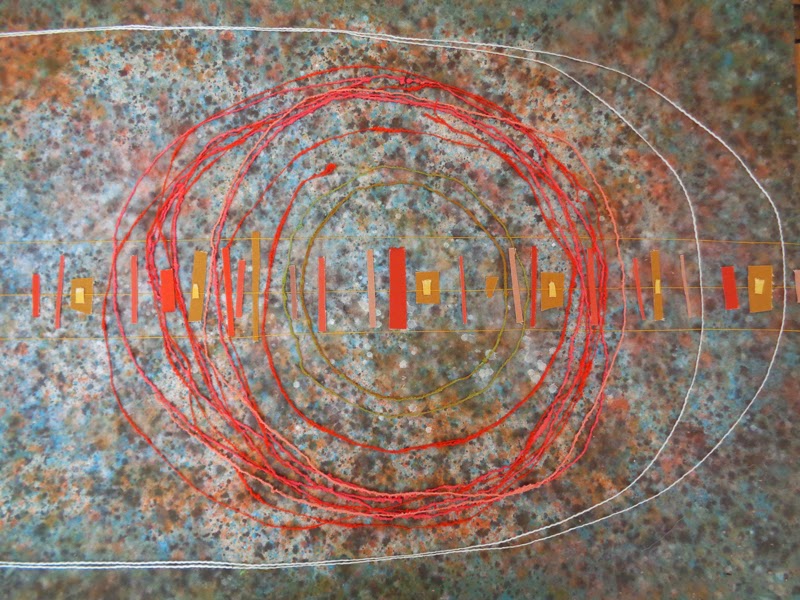 This is more planning than I have ever done in the studio.  How strange for me to work this way... but I am very determined and I enjoy a creative challenge, so I soldiered on through many workings and re-workings until I got something that felt all right.


Then I built the stretchers for these new works: 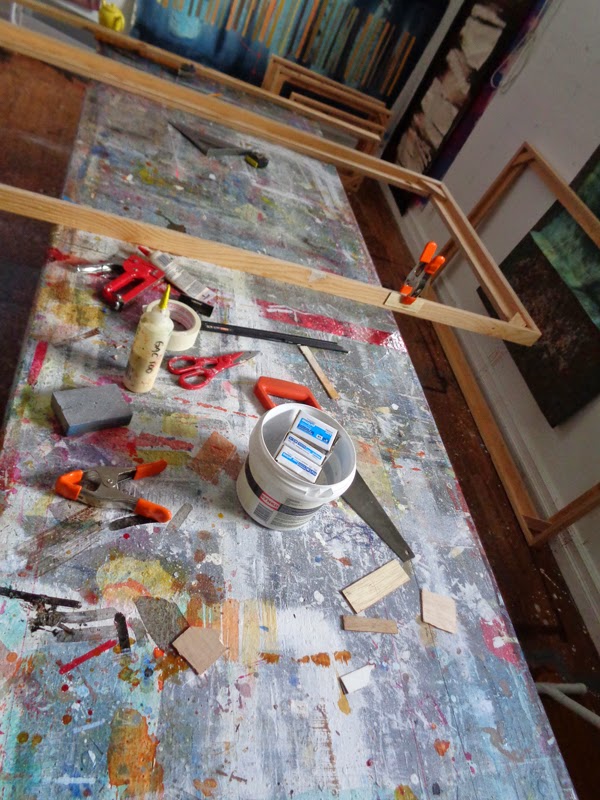 Stretched some of them, and did a bit more painting and fine-tuning after they were stretched. 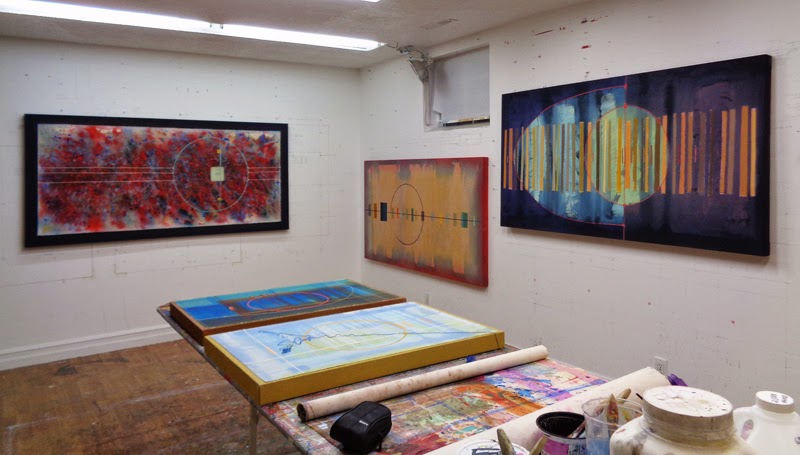 I think I can live with them.  As I work, inevitably more ideas run through my mind, too many to grasp.  But it is a start, and with diligence and a bit of luck I think I may find more depth in this very abstract imagery, this very deliberate way or working, than I first was aware of.

As to how this relates to the residency, beyond the fact of finishing the cards which began there:

While at the Artscape facility I did a variation of one of Ross's exercises: I walked with my eyes closed, letting my other senses guide me.

I have done something like this before.  On the city street, when there are no pedestrians near, I sometimes walk for, say, ten paces with my eyes closed; it is not as difficult as one might imagine.  But here was an exercise going well beyond a mere ten paces.

I walked on the grass, and when my feet touched concrete I thought I had gone into the road.  I stopped and blinked my eyes open for half a second, just long enough to perceive a narrow path of partly overgrown paving stones laid in a circle.

With eyes still closed I decided to walk the path, letting my feet feel the way and just listening to the sounds around me: waves on the beach nearby, some sort of utility box which hummed electrically, wind in a copse of trees, and the sound of my own shuffling feet.  I had to walk very slowly in order to stay on the path by feel alone.

I walked this circular path for about an hour, during which time I developed in my mind an image of the place based on the sounds I heard, audio markers which corresponded to the variations in the path: that bit which narrowed and then was completely obscured for half a step just where the wind was closest in the trees, that bit which had sunk on a tilt, just before the waves of the beach took aural precedence, that jutting-out bit just beyond the electrical hum, which I learned not to trip over simply by listening carefully.
It was a very interesting mental image.

More interesting still was when I opened my eyes and saw for the first time, visually, the path I'd been walking for an hour.  It was, of course, completely different than I had imagined.

For me, the exercise of walking with eyes closed was the most intense and rewarding one of several that Ross had planned.  I've read statistics that say humans take in 80% of their information about the world visually.  Perhaps we visual artists rely on our eyes even more than others.  Spending the time to form an idea of the world without any use of my eyes, even for just an hour, was quite an experience.

Gradually it occurs to me that the circles in my studio could be reflective of that circular walk which had such an impact on me at the residency. 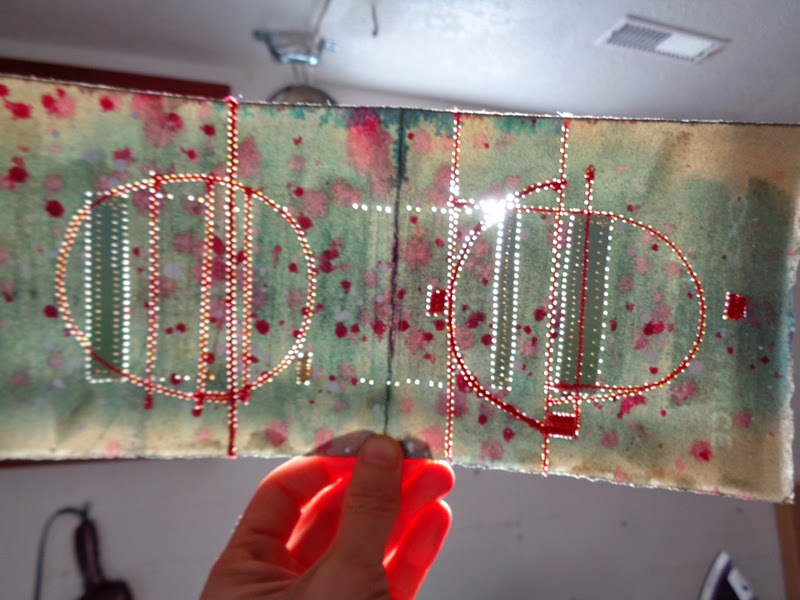