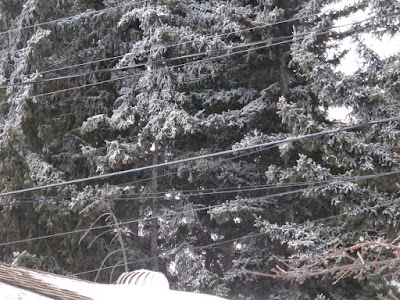 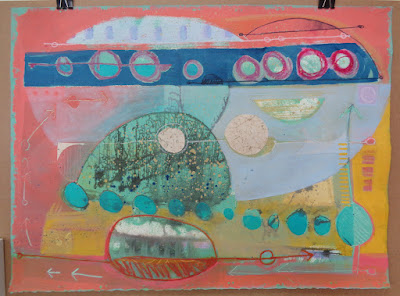 Another snowy day.  I haven't made any pictures since the opening at CKG, so getting into my studio today feels particularly fine.  I am taking my own advice today: feeling unsure about this painting, I'm calling it finished.  For now.  :)

And from a technical viewpoint:

After a couple of colour layers the paper began to buckle.  So I flipped it over & soaked the back down & let it sit 20min or so.  Then I gesso'd the back.  With green-tinted gesso, which you can see now around the edges.  I like that green edge, and I also like how gesso-ing the back prevented the paper from buckling more, while allowing me to still work on the beautiful paper surface. 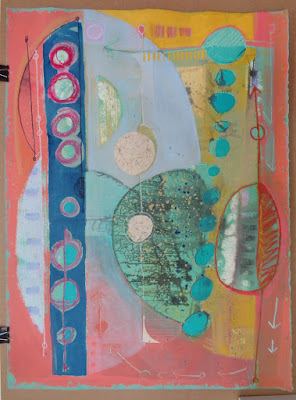 Today I met with Andrei, a neuroscience student at the U of C who is involved in endocannabinoid research as it relates to PTSD and fear extinction.  We talked about some of the specifics of his research and also a little bit about life in general.  I learned some pretty interesting things about synapses and lab rats, and also about how people variously respond to learning that they have an unalterable condition, for example diabetes.

After we'd talked awhile, I asked Andrei if I could make his portrait, and he graciously agreed.  I made two: 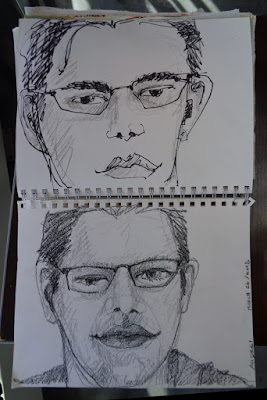 Of which I think the top one is better.  I seem to have forgotten about his eyebrows in the second portrait, and also his mouth is ill-proportioned.  I realized these things only later, as I looked at the images on my computer screen.  Trying too hard to get a good likeness, probably.  Portraits (well, mine at least) are always best in that first spontaneous visual response.

I met with Andrei because I have agreed to make a painting for an event by Branch Out, an organization that funds research such as his.

This evening I've already looked up a few of the things we talked about (hence the link to the fear extinction study results above) and it's quite fascinating.

I think one of the reasons I make art is that there was some trauma in my family when I was young, and making art has definitely helped me to deal with at least some aspects of that.  I think it's not so much the images per se, but the actual physical process, which usually involves very repetitive motions over a span of time.  Like my sketchbooks: basically the same image over and over, filling whole books.  It's very soothing, and it also becomes a method of focussed research which can lead to more involved work.

Perhaps making art helps my endocannabinoids to function properly.  Certainly making art is the antithesis of fear, even though sometimes I'm unsure of where the process is going...

Much to ponder after this meeting.

Meanwhile, I will make a painting for the Branch Out event (which by the way will be held at cSPACE in Calgary in April) and probably not really know what that painting is all about until maybe two years from now.  Typical of my process.

Thanks for a super visit, Andrei, I very much appreciate your taking the time.

Thank you too, dear Reader, and ciao for now.

A few of my most recent paintings are included in this 4-woman exhibition at CKG in Calgary.  The opening is coming up in just a few days and I'm feeling excited and a bit nervous. 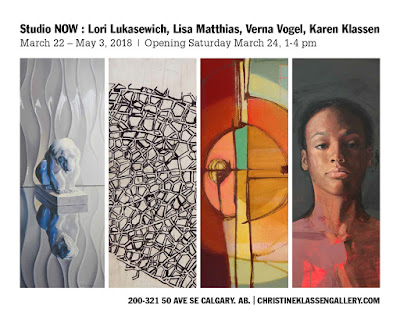 I've been trying out Mailchimp for making a newsletter about exhibitions and other events with my artwork.  I'm not really the best at advertising my work, and definitely have mixed feelings about "marketing" when it comes to what I do in my studio.  My studio is so far removed from the world of commerce...

But anyway I do have shows in galleries and other interesting and fun things, and it makes sense to let people know about these things in the spirit of sharing, right?

Here's a link to the most recent newsletter:

Thanks as always for reading my blog posts!

at 12:10 pm 4 comments:
Email ThisBlogThis!Share to TwitterShare to FacebookShare to Pinterest
Labels: exhibition

tonight I made some drawings/paintings
in a different sketchbook, lightweight paper 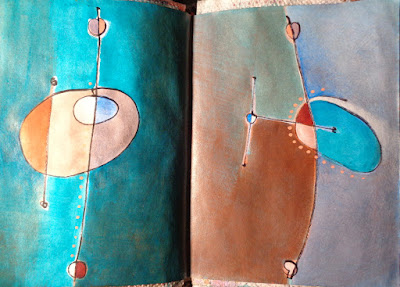 here is one
in bad lighting oh well 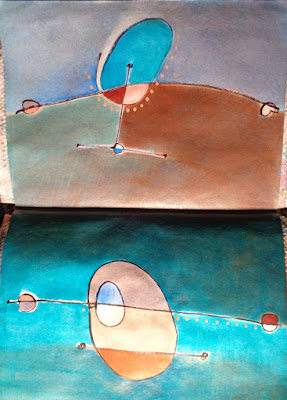 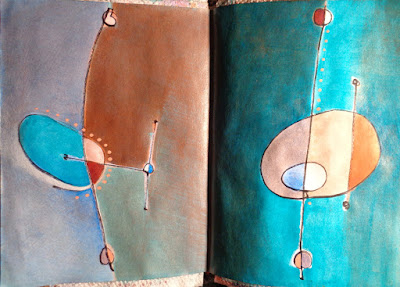 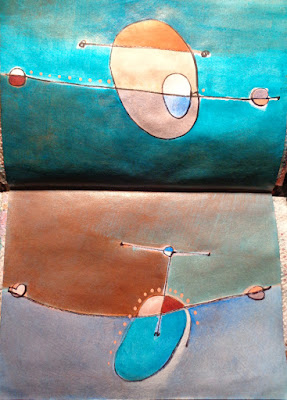