It is with great pleasure I write that my work has been accepted into the Federation of Canadian Artists "Painting On The Edge" competition this year.  Here is the piece that will be showing:

POTE will run from August 19th to September 7, 2014, at the FCA gallery on Granville Island, Vancouver BC.

Also, the Front Gallery will be exhibiting my work, along with the work of Amy Dryer, in October of this year.  Here are studio images of some of the finished pieces intended for that exhibition: 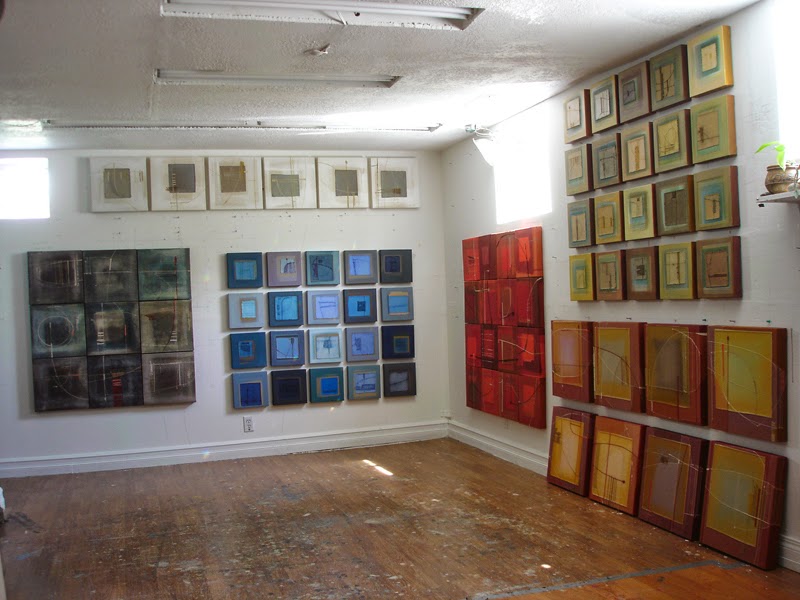 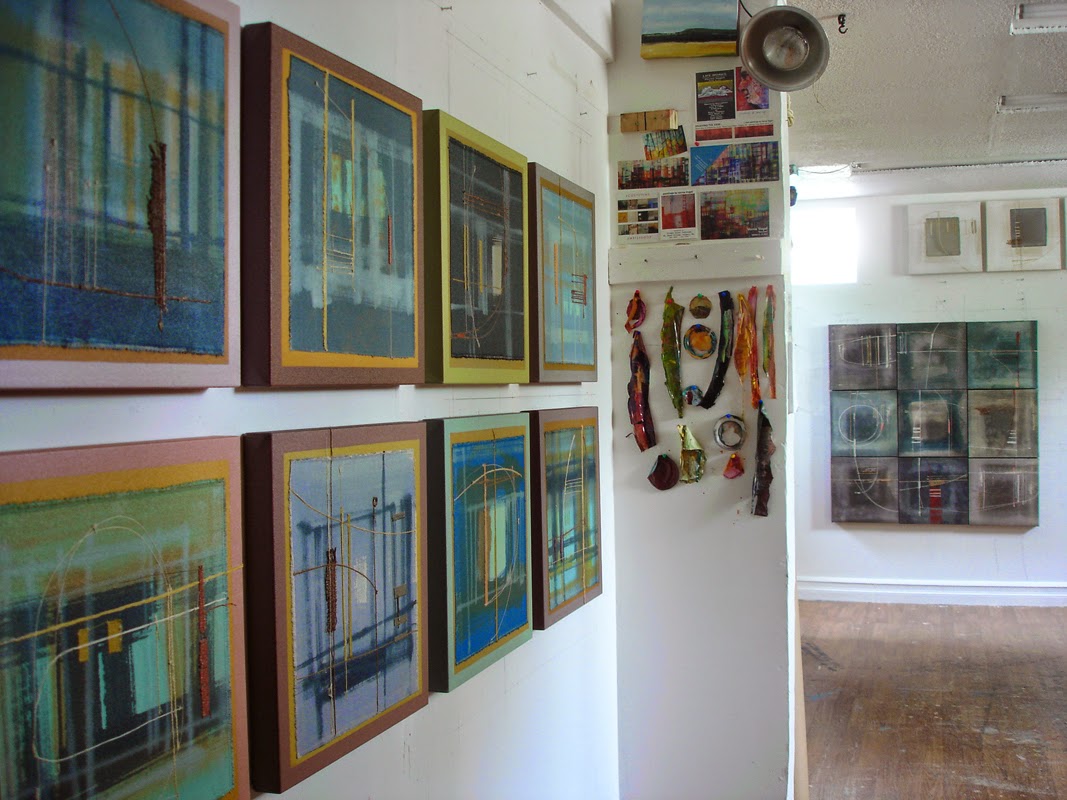 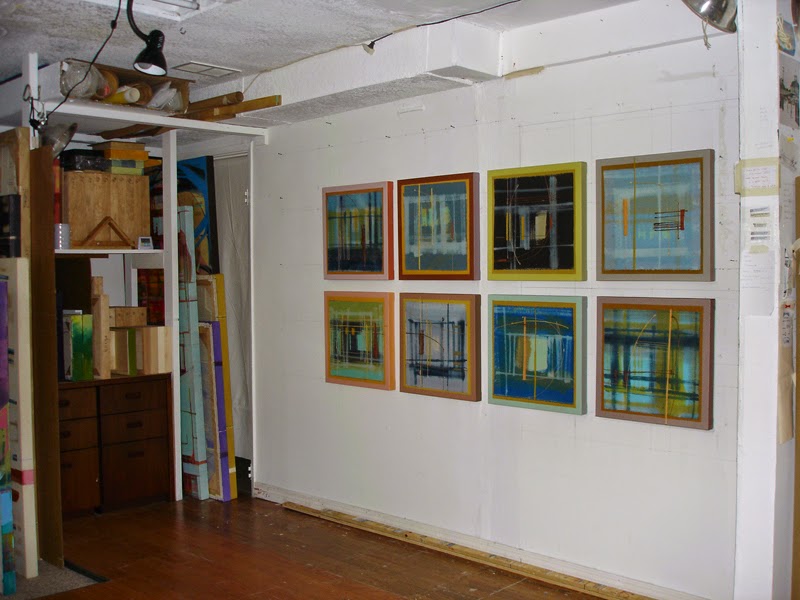 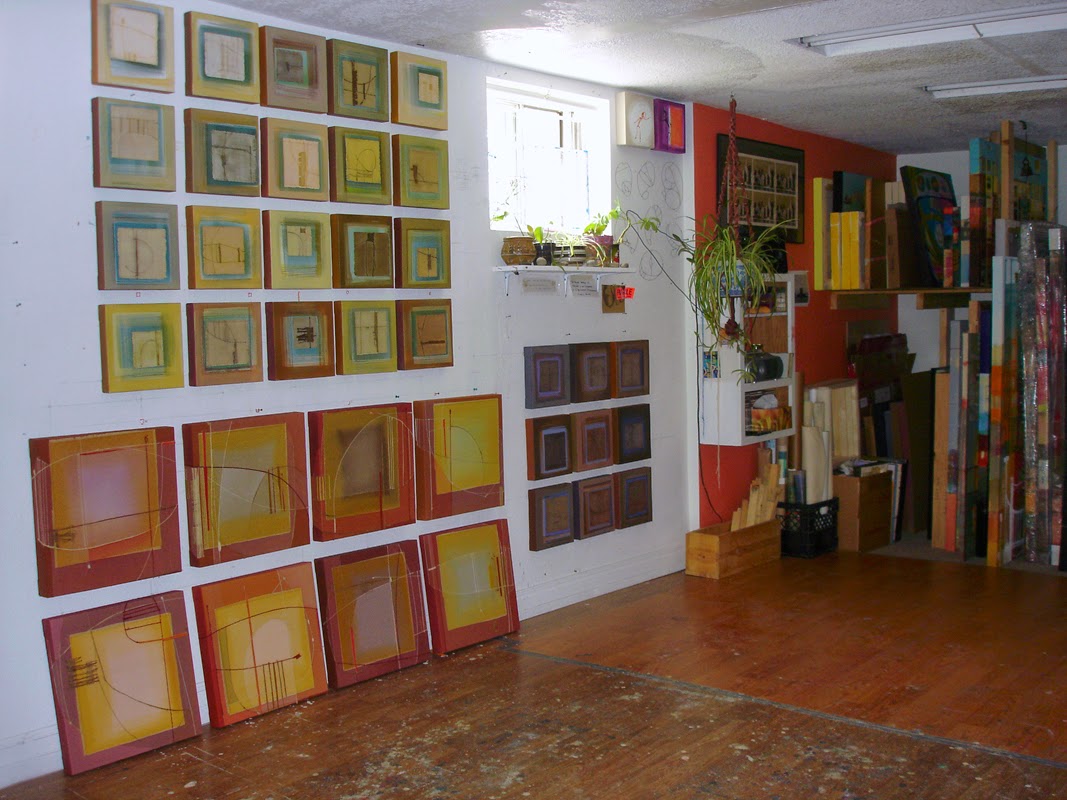 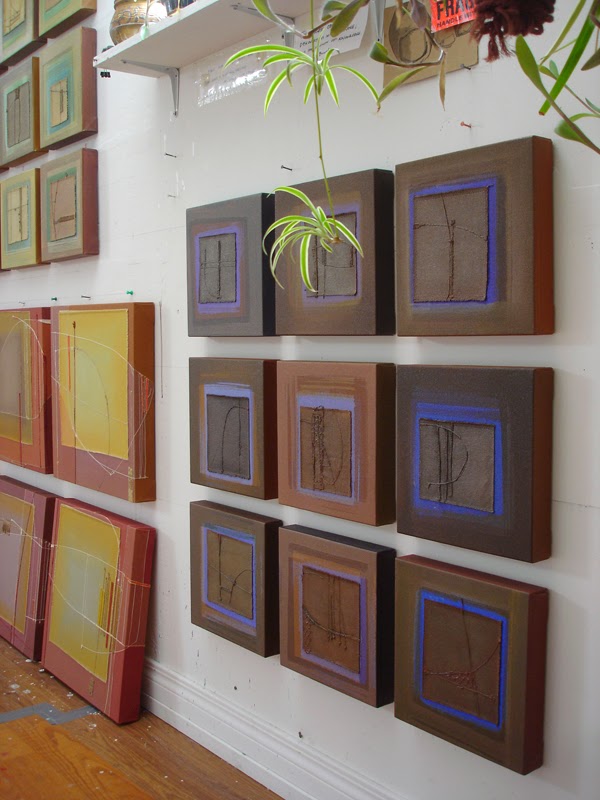 at 9:23 pm 3 comments:
Email ThisBlogThis!Share to TwitterShare to FacebookShare to Pinterest
Labels: exhibition

I've been reading The Warmth of Other Suns.  This is not a book about Edwin Hubble, but it does, very briefly, mention his discovery of other solar systems: "a faint glimmer of distant light".
I like that description.  I like thinking about what a phenomenal thing it was, this discovery, this concrete evidence of a universe much bigger than most people had heretofore fathomed.  Now almost a century has passed since Hubble made his observations and the universe is still much bigger than we can know, although we continue to try to measure it.

Here's what I've been working on in the studio these last couple of weeks: 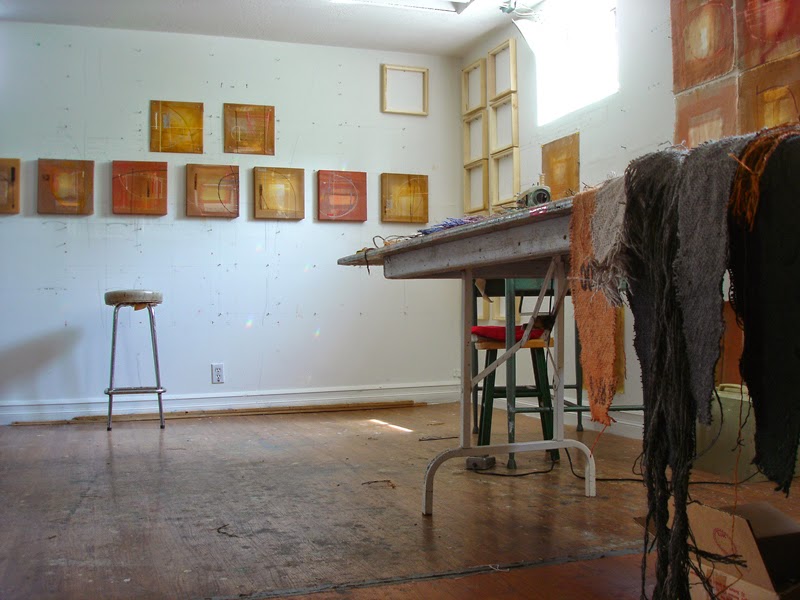 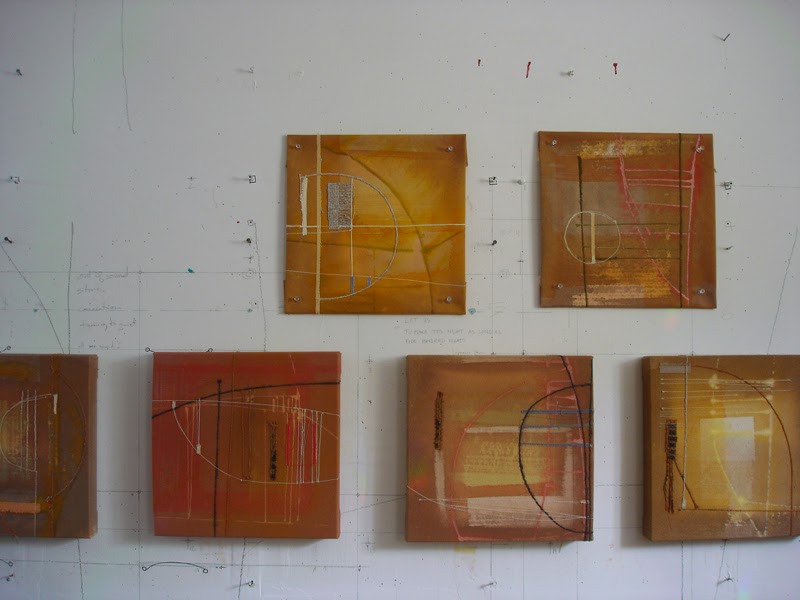 I've also spent some time working outdoors.  Shown below, sealing some finished works preparatory to varnishing, and doing some initial colour staining of canvas pieces prior to stitching: 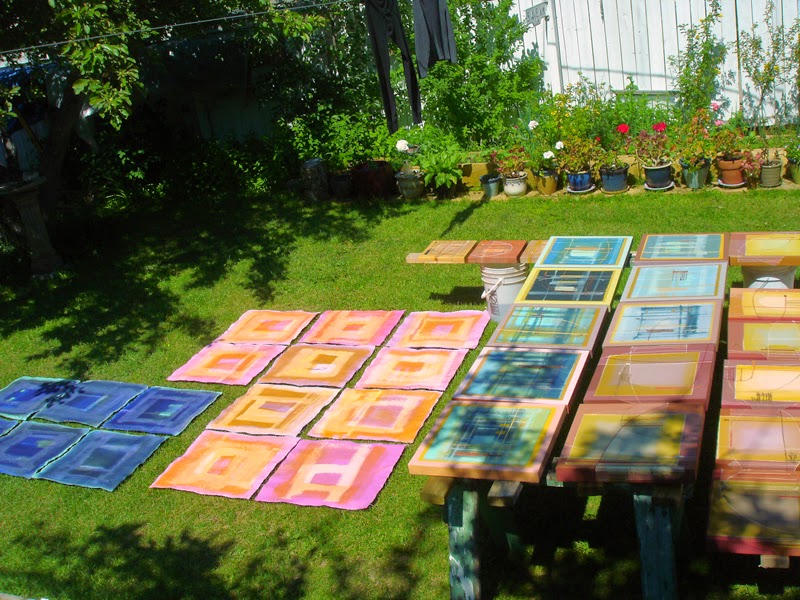 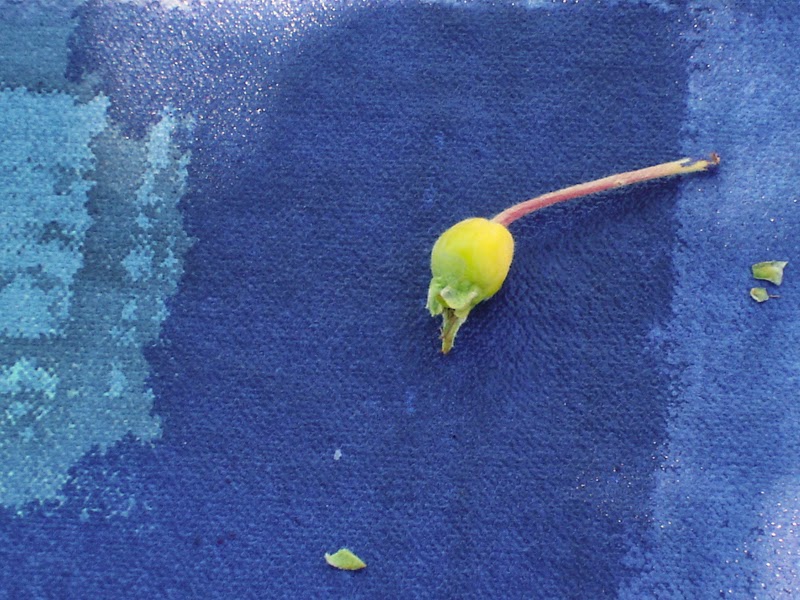 The roses were blooming in front of the fence paintings a couple of weeks ago, and one night the light was a lovely warm yellow and everything was just glowing!  Camera almost captures that light: 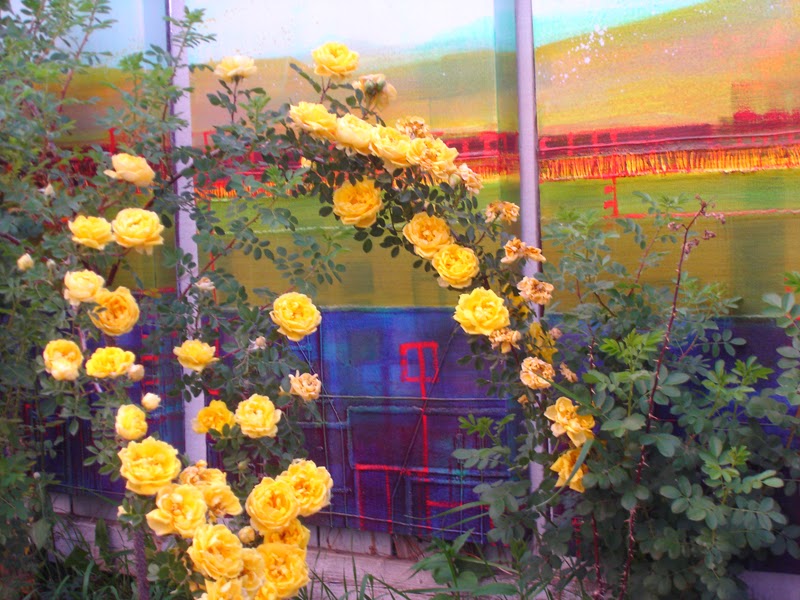 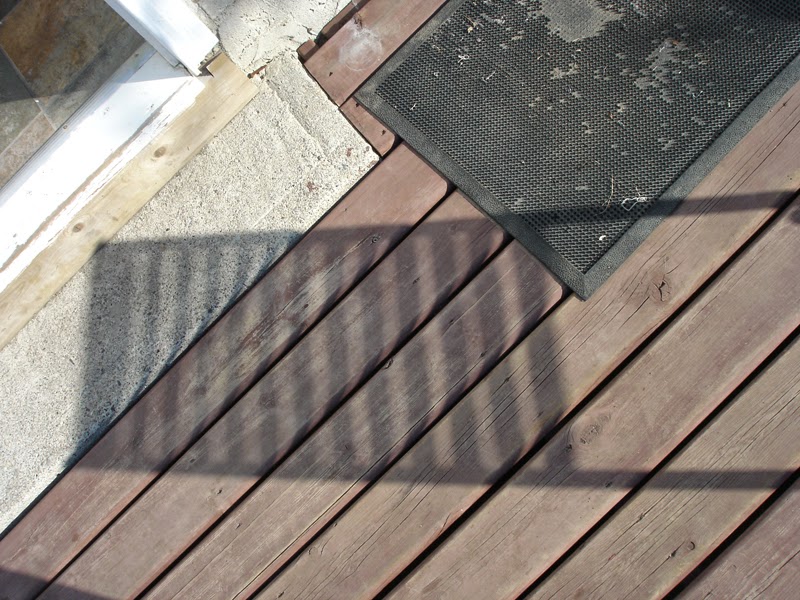 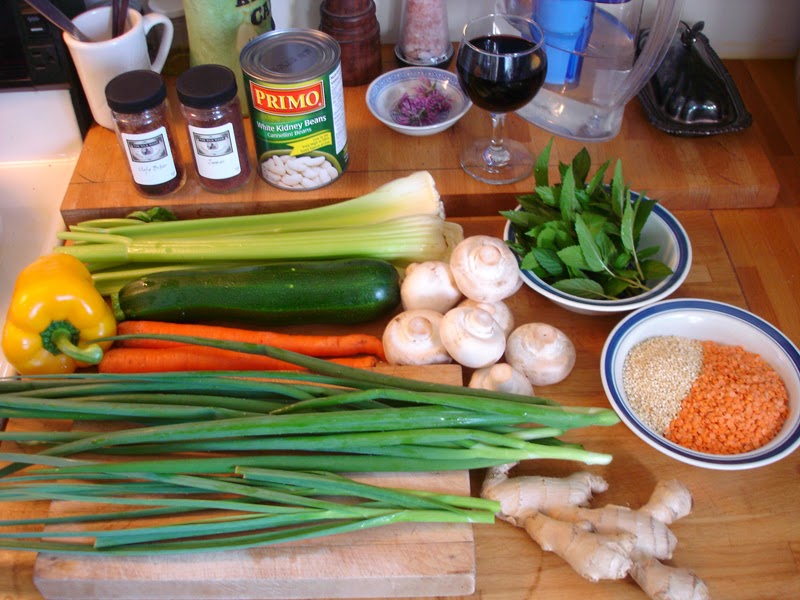 My culinary adventures go largely undocumented, but this one had got some ingredients from the garden so I could not resist a photo.  Green onions - planted from the ends of store-bought onions and grown to new heights! - and garlic chives and mint.  The rest is from the grocery store.
I do love a soup flavoured with mint and ginger.  Though the combination sounded odd to me at first it is actually very delicious, especially in hot weather.

Even this one small world is immeasurable to me.
at 9:51 pm 3 comments:
Email ThisBlogThis!Share to TwitterShare to FacebookShare to Pinterest
Labels: fence paintings, multiples

three men and a palette

Today I had the great pleasure of making live portraits in my studio!  Quite exciting, as it has been Skype portraits all the way these last couple of years.

First, Luke Lukasewich came over for a visit and a portrait session.  This was the first time we'd met in person, and I felt very comfortable with him right away.  Luke has a beautiful face to work from, too.

A quick sketch to begin with.  These generally take 15-20 minutes:

Then an oil portrait.  I think this one took about an hour.  I couldn't resist taking a photo of the underdrawing, which looks like a zombie!  Well, things often have to get ugly before they can be beautiful, right?


I make a point of not asking my sitters to sit still, because sitting still is very unnatural for humans!  So Luke and I were talking and he was moving around a bit and this portrait shows that, which I like very much.

Then, while I had the oil paints and brushes out, a friend who's been staying with us agreed to sit for me.  He was a little more self-conscious and sat fairly still.  Again, I made a quick sketch and an oil painting.

Lastly, a portrait of my best friend.  He is not very comfortable being the centre of attention, which includes my artist gaze, so I very much appreciated his sitting for me.  And he sat very still indeed!


About 10 minutes into the oil painting he was asking if it was done yet!  So I skipped trying to colour anything in and left it as more of a sketchy drawing kind of painting.  It took maybe half an hour, maybe less time than that.

All today's portraits turned out rather nicely, in my opinion.  A good day. 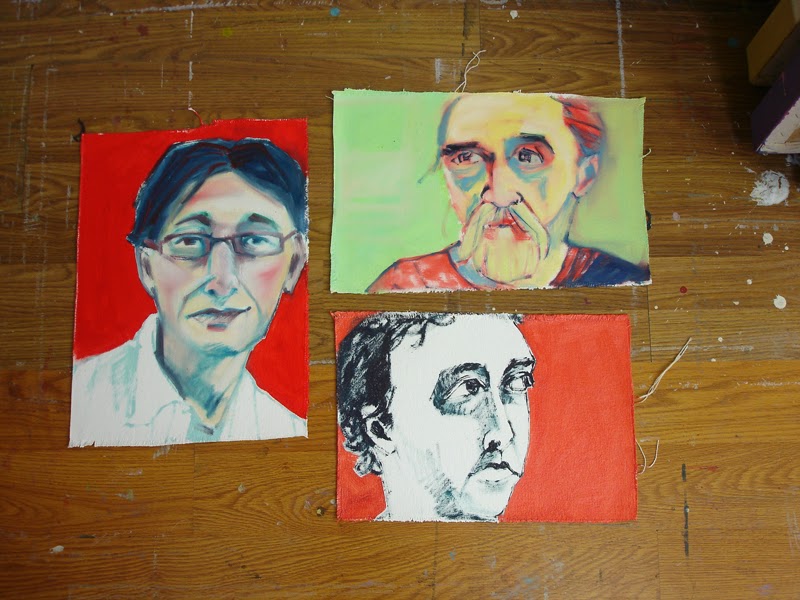 at 9:58 pm No comments:
Email ThisBlogThis!Share to TwitterShare to FacebookShare to Pinterest
Labels: portraits

Silk Worms and other things

Today I found myself again in the countryside north of Calgary, spending the afternoon at a friend's cabin.  Brought my painting gear along, surprise surprise.  *laughs*

First off, though, I became entranced by a multitude of ants who appeared to be moving house.  Travelling along their route, they were carrying eggs of all sizes - and some were carrying other ants, something I have never observed before.  Newly hatched perhaps?  They were small and curled up and seemingly inert as they were being carried along.  They put me in mind of de-activated robots.

After spending half an hour or so observing the ants, I figured I may as well get some painting in, as I had my kit with me and all.


Somehow I was not quite into painting a landscape in my usual way, today.  Maybe watching those ants had something to do with it... why try to depict only the surface of the thing when there is so much going on underneath? kinda thoughts.  So this painting was done in about 20 minutes, trying to catch some essence without fussing over surface details.


And here's a glimpse into the studio of late:


So here I am playing with edges, how to treat.  Working title: "Silk Worms".  This refers to the line quality and the organic but measured way those lines build up.  It also refers to some idea of things I have been reading in John Donne's "sermons" where he writes about the human desire to transcend earthly existance - everyone's body is eaten by worms in the end, and after death one cannot transform those lowly earthworms into silkworms.

I have really been thinking about what, exactly, I hope to accomplish with this life of art-making.  Not so much in a worldly sense but in a (personal? spiritual?) sense... no concrete answers yet, only questions.

And below, a new series underway.  Playing with the idea of an echo or shadow; this photo shows the very initial stages of that idea:

Acrylic inks, which have not been used in a long time and which, I am certain, are very happy to have a purpose once again.