In mid-January I had the great pleasure of teaching an art class with Grade One students who were learning about and discussing ideas of "community".  It was a Campus Calgary session, and I had three mornings with them.

First we briefly talked about what community means, discussing concepts like Sharing, Mastery, Generosity and Belonging.

Then we made a body project.  It was a really big project! 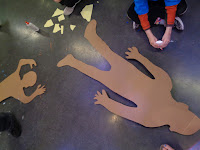 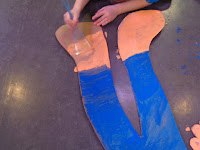 Working with a partner, the students took turns laying on large sheets of cardboard and traced one another's body shapes with crayons.  Their teacher, parent volunteers and I cut out the body outlines. 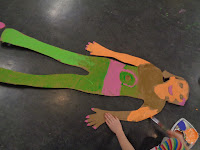 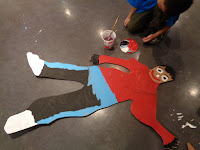 Then the students painted one side of their body cut-out, and used collage techniques to glue coloured papers, fabrics, yarn and beads on the other side. 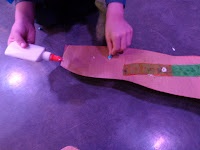 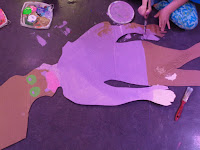 On the last day we hung them from the ceiling, with their feet just above the floor, to create an art installation.  The body shapes could move and twirl on their strings, creating a kind of dance.  It was a whole community of colourful dancing figures! 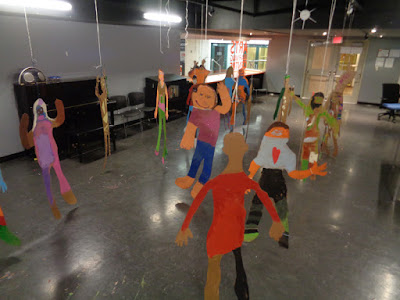 I delight in creating large art projects with students who come out for the Campus Calgary sessions at the Arts Commons.

Any creative process spanning several days is an opportunity for more in-depth reflection of ideas and processes.  And if you think of creativity as a problem-solving tool, well then "sleeping on it" is an important element, n'est ce pas? 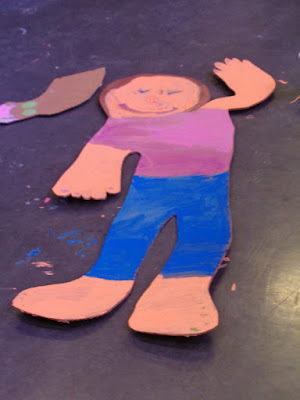 Many thanks as always to the supportive people at Arts Commons, to Mrs. G, the parent volunteers, and to the kids who are invariably eager and expansive thinkers and doers.

Working together, we create what I hope are memorable learning experiences, and that is a type of community worth being involved in.
at 1:46 pm 2 comments:
Email ThisBlogThis!Share to TwitterShare to FacebookShare to Pinterest
Labels: body project, teaching

the kitchen and the studio 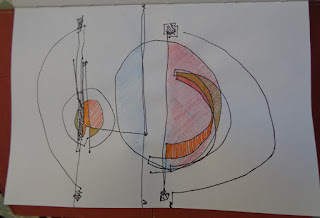 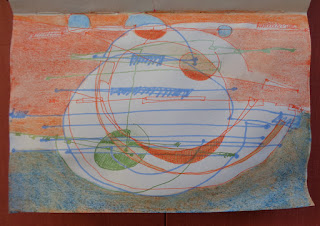 This morning I made a few "blind" drawings in a new 6x8" hardbound sketchbook.

It was a nice morning mediation kind of exercise, which I did while sitting at the kitchen table enjoying a cup of hot black tea. 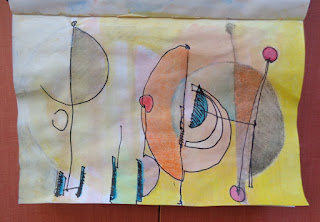 Because I haven't done these in awhile, they feel different again.  I used more colour, and spent more time working on them, than in the previous sketchbook. 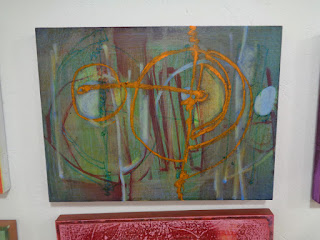 During the last few weeks, I've been taking the idea of the blind drawings... 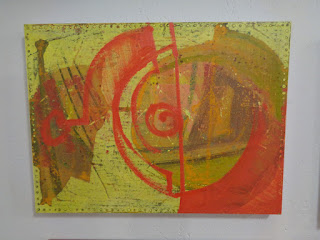 (which in this case means making the lines and shapes entirely with my eyes closed, and then working them up a little bit more with eyes open) 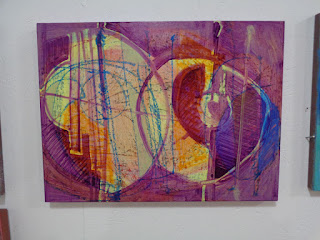 ...and exploring how I might translate them into paintings.

These four studies are still in progress.  Oil on wood panels, 12x16 inches each. 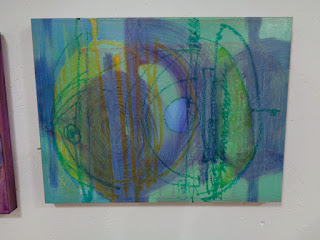 In between all this, I made a large oil painting.  It's about 72 inches wide, and I think it's finished... though it'll have to sit for a bit before I'm sure. 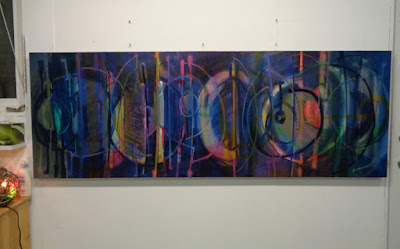 I've heard that the studies are supposed to come before the large work, but in this case they are all happening together.

It's so good to be working with oils again, in a studio that is really separate from the house.  A couple of weeks ago my husband helped to install an exhaust fan, and together with the air exchange and wearing a mask and gloves, I am confident to use the various oil mediums again without compromising my health. 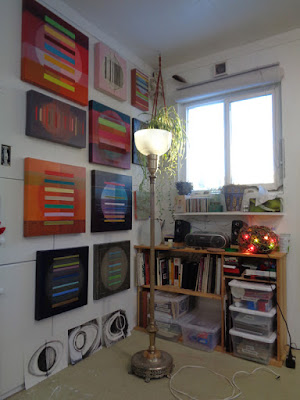 And there is one corner of my still-new garage studio, showing a few of the "Sound" paintings and my bookshelf which also contains plastic storage tubs filled with printmaking tools and supplies, including the various parts of an almost-finished installation project which I've been working on for almost 7 months now.

Also on the bookshelf, lit-up, is my Creative Brain, my much-loved studio mascot.