Besides working with my friend, I did a few other things in Toronto last month.

I went with several friends to the AGO.

On the 5th fllor, Rebecca Belmore installations and performance documentations.  Her work titled "Fountain" really caught my attention.  It was screened on a wall of water.  Technically wonderful and also very beautiful.

There were several of her works in the gallery, and I wished I could spend more time with them.  Good thing we have the interwebs, where I found this interview about "Fountain"

Also, as usual at the AGO I wound up in the Henry Moore room.  This room for me feels a bit like a temple.  All the plaster forms; the clean shapes with scarred surfaces. 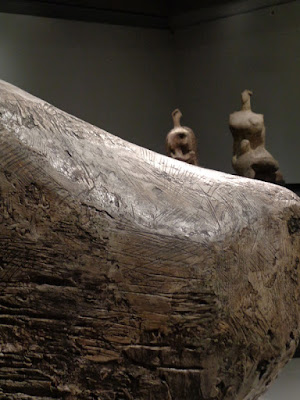 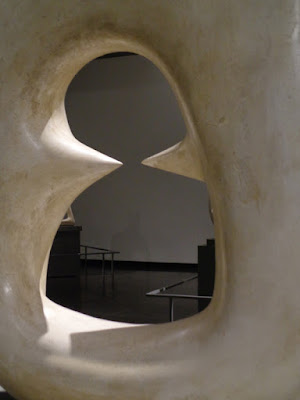 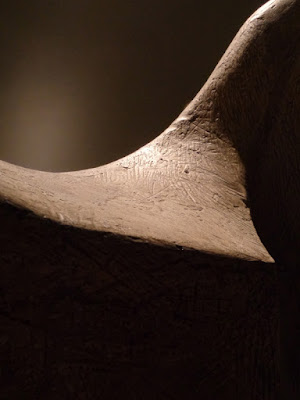 I kinda wish I could have a sleepover in the Henry Moore room, spend 24 hours in there with all those gorgeous shadowy forms.

Another day, I went with a friend to the ROM.

And spiders!
Above image is of a cape made entirely of spider silk.  It may be the most beautiful piece of textile I've ever laid eyes on.

I also visited the downtown studio of my friend, an artist whom I respect highly.  Here's a link to her website.

I took very few photos of things while in Toronto... I think I am losing my desire for making photographic recordings.  But here is one:

In contrast, I have not lost my desire for making sketchbook recordings of people's faces.  Here are portraits of various friends, acquaintances and family members, in the 9x12 green book.  It's very close to being full now.


Returning to Calgary, I was very eager to frame my paintings for the Art Now in Saskatchewan, but had to wait to borrow a framing gun.  Argh!  *laughs*  Well what can you do... work a bit on paper while waiting. 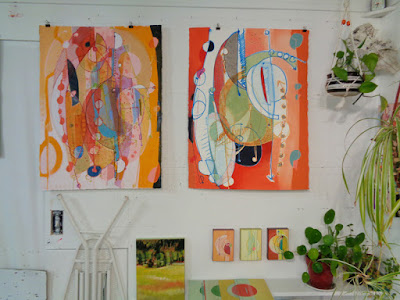 Below, the paintings going to the Art Now fair, framed at last :)

And one more portrait!  MC, co-founder of Art Calgary.  She came to my studio to pick up my work for the fair in Saskatoon, so of course I had to record her face.

And now the teaching cycle resumes.  I'm hoping to amp up my teaching gigs because I could use a bit more income these days.  I'm also hoping to continue being able to get into the studio for some good swathes of time... wish me luck!  *laughs*
at 12:58 pm 2 comments:
Email ThisBlogThis!Share to TwitterShare to FacebookShare to Pinterest
Labels: abstract, portraits, travelling 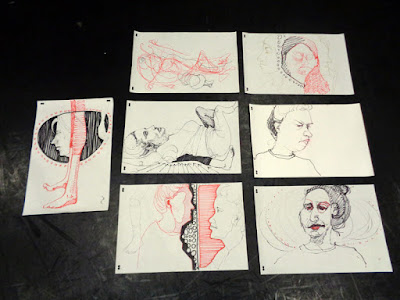 I recently spent some time in Toronto ON, working with a friend who is studying performance and movement arts at York University.  We had seven 8-hour studio sessions booked; here are a few of the drawings I made during that time.

A long time ago I did a lot of life drawing, working with professional artists' models who would hold very still for durations of time.  It's an excellent practice, one I would recommend to anyone wanting to hone their drawing skills.

Once I'd honed my own drawing skills (a 4-year process of drawing from life models several times a week), I began to be bored with immobile humans.  It's very unnatural for anyone to sit still for any length of time; in fact it's inhuman.  So I stopped.

Instead, I drew people while travelling on transit.  I learned that it takes 30-45 seconds for most people to realize they're being observed, at which point the drawing must be finished.  I got really quick at making portraits!  And I've kept up making portraits all these years, mostly in 9x12" sketchbooks.

Sketchbook portraits aside, I have done extremely little figure drawing in 20 years.  So it was a very open-ended endeavour to work with my friend, who would be in almost-constant motion.  And I went minimalist, bringing only big paper and drawing tools.  No paint, no brushes!

About halfway into our time together, some of my markers began running out.  I saw this as an opportunity to procure a couple of hardware-store brushes and a bit of ink.  ;-)

Mixed in between all this I made a bunch of large portraits.

Because I can.  Somehow I can draw fast enough, even on a larger scale, to make portraits while a person is moving, and taking on various personas, and talking-whispering-yelling, and generally doing everything but staying still.

I'm enthralled by the magic of that: a person just being human, and me drawing them.


It was really cool to see my drawings emerge as we worked: to see my same basic style from years ago when I worked large scale from models, now augmented by 20+ intervening years of non-figurative art-making.

At the end, we are hoping to work together again, perhaps next year, and perhaps using some different materials.
Already, ideas begin to emerge.  Wait.  Let them pupate.  See what happens.